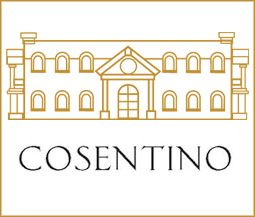 Cosentino Winery is the first stop when entering Napa Wine Country, located on the historic St. Helena Highway. In 1980, Cosentino Winery made its inaugural vintage that released in 1981. In 1989, they released ‘The Poet,’ which is one of the first designated and licensed US Meritage wines. In 1990, they launched THE Series wines, designed to showcase the best grapes from the Lodi Appellation. Recently, they partnered with partnered with Marty Peterson (Vice President, Winemaking Operations, Vintage Wine Estates Winemaker, Cosentino Winery). Marty comes from a family with a rich farming history. In 1904, his great-grandfather, Carl A. Peterson, made his way by ferry to Lodi, an agricultural community at the mouth of the Sacramento River Delta, 60 miles east of San Francisco, where he founded the family ranch. For more than a century, the Peterson family has farmed 100 acres in the Lodi region, now planted to fine wine grape varietals, as well as Bing cherries. The fourth generation of growers from the family property, Marty grew up in a community of farmers who shared a similar commitment to the land. The childhood friends and family relationships forged over many years are still firmly in place, giving him an insider’s insight—and connections— into this important, emerging winegrowing region. Marty received his Bachelor of Sciences in Enology from Fresno State University in 2002, giving him expertise on the cellar side and refining his natural farming knowledge. Peterson joined Vintage Wine Estates in 2011 as winemaker for Viansa Sonoma; in May of 2015 he was then appointed Winemaker at Cosentino Winery, where he draws on his deep roots in the Lodi region, as well as his knowledge of the Napa and Sonoma appellations, to create uniquely expressive wines of balance and complexity.

The grapes for THE Cab were hand-harvested in Lodi, an AVA known to benefit from the cooling Delta influence. The 2016 harvest was notably even and steady, providing balanced yields of quality fruit, allowing us to craft a wine with intensity and interest. A great wine on its own or with your favorite red wine friendly cuisine—enjoy now or over the next three years.

Predominantly Cabernet Sauvignon, with a hint of Petit Verdot

“Our 2016 THE Cab is a rich ruby color in the glass with sultry aromas of boysenberry, black currant, baking spice and vanilla. The luxuriously supple palate reveals flavors of blackberry cobbler, cedar spice and a balanced finish marked by velvety tannins.”

Blow the dust off the grill and fire it up with some steaks, burgers, or ribs. To be more specific, think braised short ribs, garlic chicken wings; or, for the vegetarians olives with roasted garlic & tomatoes, Zucchini Gratin with tomato confit, and grilled Portabella mushrooms with garlic and a balsamic glaze.